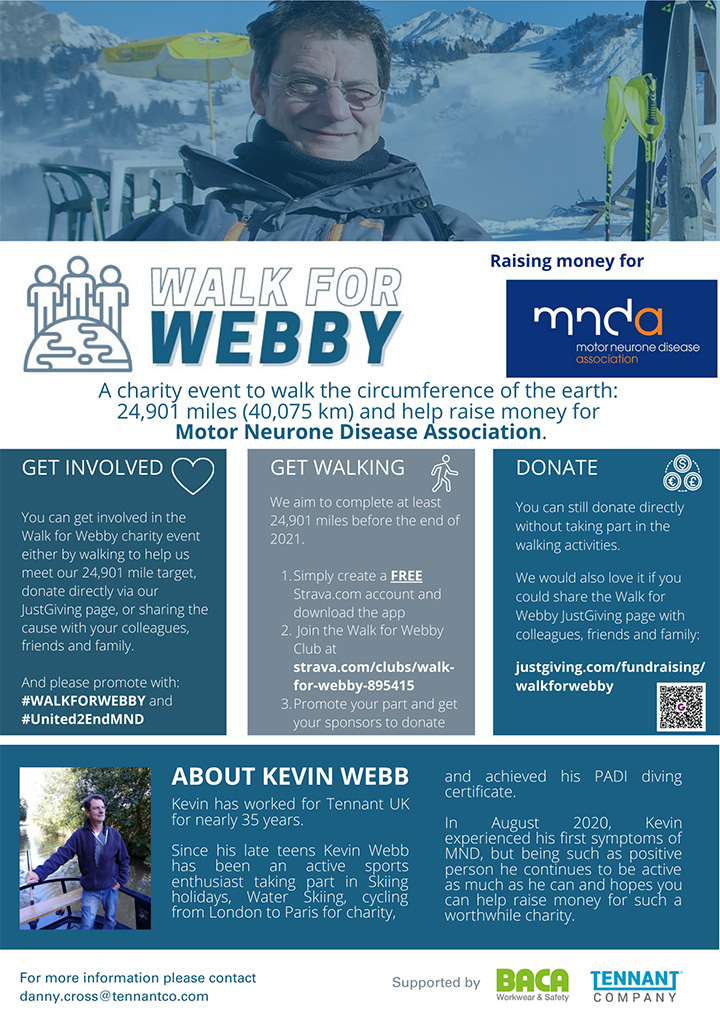 Baca Workwear & Safety are proud to sponsor 'Walk for Webby'

Originally in a sales support role in the Northampton and surrounding areas, which also involved the fixing of machines - back in the day when there was no mobile phones and job sheets and time sheets had to be sent off in the post.

Over the years, Kevin was promoted to various roles including his current role of Regional Service Supervisor, responsible for a team of field based Engineers.

Throughout his career with Tennant, Kevin has been married to his wife, Alison.  They have been married for 38 years this September.  They met via Alison’s cousin and probably known each other since they were 16 years old, becoming a couple not until they were 19 / 20 years old after a day out together in Eastbourne, visiting Kevin’s aunt.

Most weekends Kevin and Alison would be water skiing together (until Kevin turned 36) and until they had their son, Jamie 22 years ago.  They also enjoyed skiing holidays in the Alps at least twice a year.

Kevin was in his late teens when he started snow skiing, with Jamie skiing with them for the first time at the age of 18 months.  This led to Jamie joining Milton Keynes Ski Club where Kevin took him every week for training and supported him throughout his races.

Kevin has always been a very active person.  As a youngster he spent a lot of weekends caravanning with his parents, enjoying the outdoor life.  Kevin also enjoyed a sporting lifestyle.  He took up ice skating at a young age which led him on to play ice hockey.

It was around the age of 10, he started water skiing, with many a weekend spent at the coast water skiing. He was a member of the Cotswold Water Ski Club for many years until he gave up water skiing.

Kevin also took a PADI driving course and enjoyed diving in many foreign countries, such as the Caribbean, Mexico, Barbados and Cyprus.

Kevin also enjoyed cycling, often doing charity cycle rides: London to Brighton for the British Heart Foundation several times,  and once with Jamie when he was 14 years old for a local charity, Wheelpower.

When Jamie was 5 ½ years old Kevin took him on a 15 mile ride for a child’s charity.  Kevin and a colleague cycled from London to Paris in 3 days for Medical Research with the full backing of Tennant, raising over £2,000 each for the charity.

No surprise, Kevin has had various cycle holidays with friends in France and Denmark.

It was snow skiing that was Kevin and Alison’s real passion.  Kevin’s last ski holiday was in January 2020 in France.  Little did he know this would have been the last time he would ski.

In August 2020, Kevin experienced his first symptoms of MND.  Whilst at work, he was walking along a pathway in a basement in the Mall at Luton when his leg turned to jelly and he collapsed – narrowly missing being run over by a lorry.

At the time Kevin, did not really give this incident another thought until he was on a narrowboat holiday a week later – and his leg gave way again a couple of times when getting off the boat – even though he had managed a 4 hour canal sidewalk that week.

It was 4 weeks later, Kevin noticed his leg was dragging and his back ached.  Kevin decided to see a Chiropractor who advised Kevin had a dropped foot on his left side.  The chiropractor suggested he saw his GP as he also suspected he had a trapped nerve.

Alison was becoming concerned, she had seen that Kevin’s feet were turning inwards.  Alison saw a sign on the side of the road for a Neuro-Physician and made an appointment for Kevin to meet Sarah Dickson at Christmas.

Sarah must have also been concerned, because she decided to forward her findings to Kevin’s GP.  After Kevin saw his GP, he was referred for a MRI scan due to the GP being concerned that his whole left side was weak.

Throughout this time, Kevin thought he might have suffered a stroke.

The MRI scan results came back clear however Kevin was referred to a Neurologist.

Kevin met with Dr Briley, consultant Neurologist from Stoke Mandeville Hospital on 13th January.  Dr Briley visited Kevin and Alison at their home and told them that he suspected Kevin may have MND.

Alison and Kevin were in complete shock and disbelief.  Alison had heard of MND but Kevin had not really.  Kevin wanted to know what could be done, and was told in a very straight way that nothing can be done.

Dr Briley wanted Kevin to have a second opinion from his colleague at John Radcliffe Hospital.  It was on the 1st February Kevin and Alison met with Professor Kevin Talbot.  The diagnosis was confirmed – Kevin had MND.

At this stage, the only question Kevin had for the Professor was ‘How long have I got?’

Alison has found it difficult to tell people about Kevin, struggling to say the words.  For quite a long time, Alison could only text people telling them of Kevin’s diagnosis.  Whilst, Kevin feels able to talk freely to people about his situation – preferring people to hear it from
himself.

However, having to tell his parents and of course Jamie was incredibly hard and highly emotional.  Alison recalls, walking into the house and Kevin had informed Jamie and they were both crying and holding each other.

Both Kevin and Alison do not feel able to read through the MND material provided to them by their MND Specialist Nurse, Rachel.  They will when they are ready, but for now Kevin wants to continue working and living as normal for as long as he can, knowing he has great support from his friends, colleagues and the Tennant company generally, and customers alike.

During 35 years at Tennant, Kevin has only had a maximum of 5 weeks off due to sickness in total, 3 weeks of which were due to a broken foot.

Kevin knows his quality of life will change in time and he knows it is only going to get worse, but right now he is in denial, even though he jokes about having a pimped up wheelchair.  Alison is scared to think about what the future holds.

Before the diagnosis, Kevin and Alison had plans for the future.  At the age of 62, Kevin was thinking about retiring in about 3 years’ time, with plans for working on an old car, having a part time job, perhaps working with the National Life Boats Institution (very close to Kevin’s heart), and having a mobile caravan by the coast.

Kevin would also have loved to have visited Canada and New Zealand, and enjoy more cruises.

Now, future plans are limited to narrow boat holidays, with the support of friends, and hopefully cruises around the UK and train journey holidays.

Kevin feels so grateful that he has done so much when he and Alison was younger, instead of waiting until he would have retired, creating so many memories and being lucky enough to see the world.

Kevin’s motto has always been ‘do things while you can as you never know what is around the corner.’